Rembrandt was born in 1601 in Leiden, Netherlands and practiced his craft as a painter and engraver during the Dutch Golden Age, the period that immediately followed Dutch independence and saw the rise of the Netherlands into a Protestant economic and cultural world power.

Rembrandt is considered by many historians to be among the greatest masters of the medium of paint, and was renowned for his ability to subtly but powerfully communicate emotion, as well as his use of light and darkness in his works. He was a devout Christian, although like so many other believers, perhaps especially public ones, he had his foibles and attendant sins. But his deep convictions and piety led him to often etch or paint Biblical stories. Some of his best known are The Storm on the Sea of Galilee and The Return of the Prodigal Son. 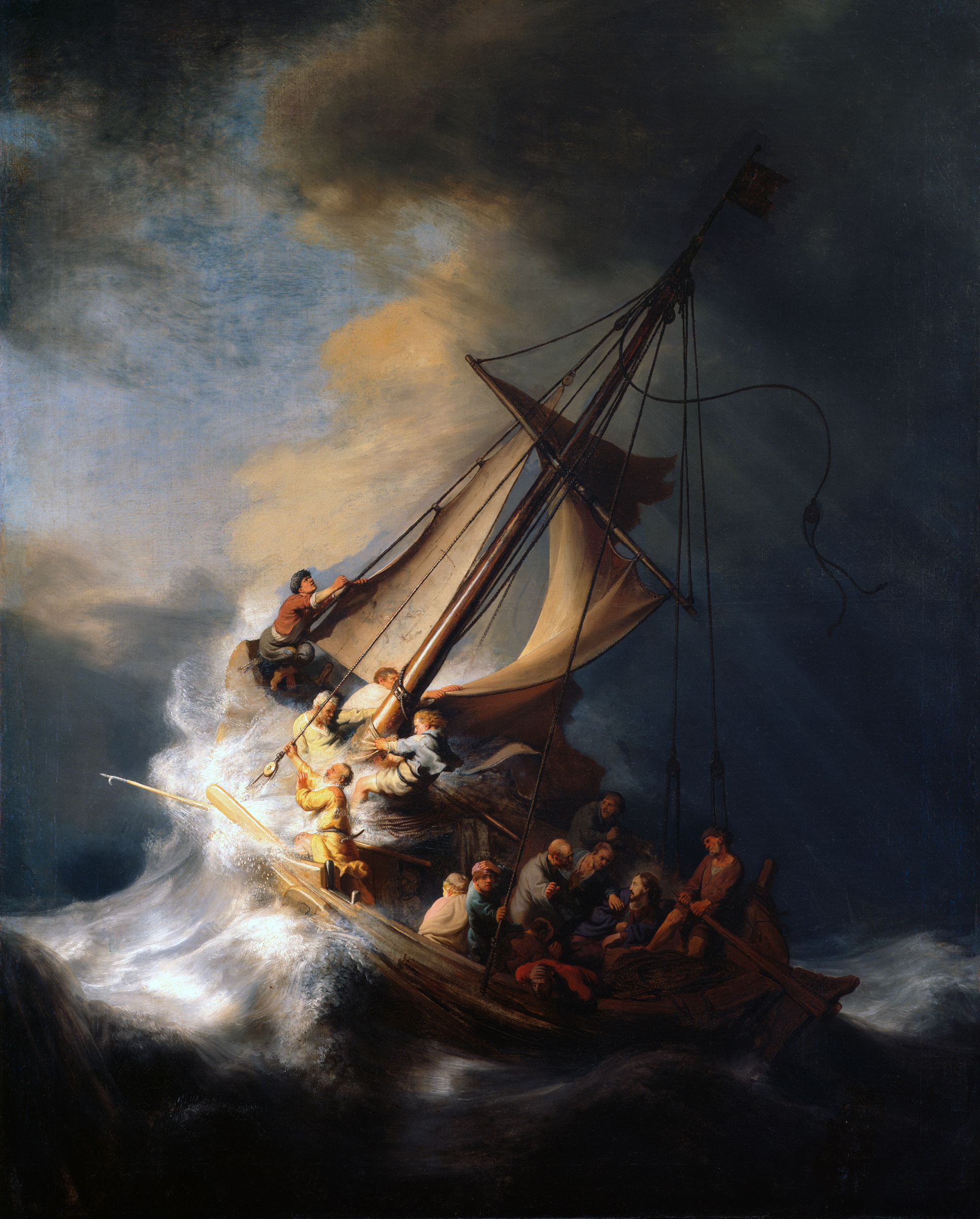 But one of his favorite accounts to which he returned again and again, was the Nativity. We have at least five of his etchings and five of his paintings. The most famous of these is probably Adoration of the Shepherds. In this painting the background, comprising probably half the entire painting, is almost completely black. A ladder, a bird, and even many of the Shepherds are barely visible in the shadows surrounding the main focal point. Inside them are five other figures which are lighter and more visible, among whom are Mary and Joseph. And in the very center, as the source of light to the entire group, emanating outward, is the infant Christ. As an interesting touch, one of the Shepherds further back is holding a lantern, but the light emanating from the manger is far, far brighter than the flame in the lantern. 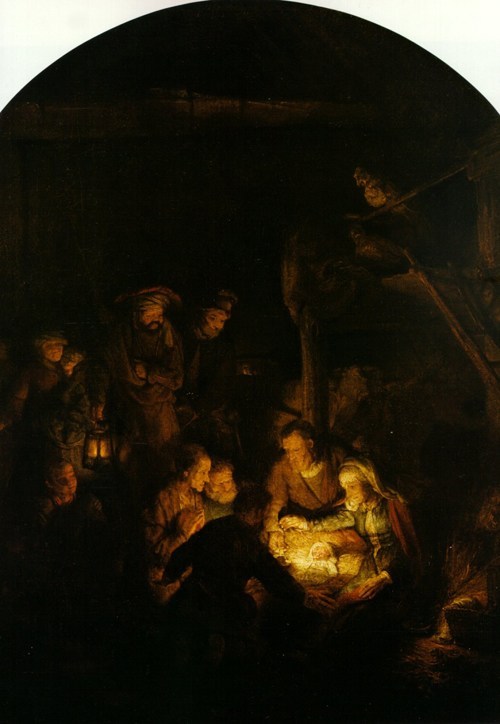 Rembrandt captures in this painting a Biblical truth that probably wasn’t visible to the eyes the night Jesus was born. It is a truth, however, that is revealed to us through the words of Scripture–God’s revelation to us. There are limits to what our eyes see. But God sees and knows all.

Jesus, Light of the World

For this Christmas meditation, I want to remind you of the incredible juxtaposition of this little baby being life and light. And once again, to urge you to come and worship.

The beginning of John’s gospel is unique among the other four accounts we have of Jesus’ life. John, writing later than the other gospel writers, assumes that we know the basic outline of Jesus’ life: how he was born of a virgin, lived a perfect life, preached a message of repentance, healed the sick, cast out demons, died on a cross, and rose again. John doesn’t overlook those things, but he does look at them from an interesting, you might say philosophical, perspective. He has the advantage of time, and he emphasizes the God-ness, or the deity of Jesus Christ.

This baby that was born and laid in a manger in Bethlehem some 2000 years ago was the Word of God. Although this baby had a beginning, the Word of God was already with God in the beginning. And though this baby’s body had been knit together in his mother Mary’s womb, yet in verse 3 John says “all things were made through him”. And it is because of this that he states, “in him was life and the life was the light of men”.

And though this baby’s body had been knit together in his mother Mary’s womb, yet in verse 3 John says “all things were made through him”.

Think about how paradoxical this is. Normally when we think of a baby being born, we think of that baby being given life by his mother. The child is the recipient of life. But in this case the infant Jesus, although in one sense a recipient of life as to his humanity through Mary, yet in a larger and more profound sense is the source of all life and has come into the world that others may receive life! As Jesus will say later in John 10:6, “I came that they may have life and have it abundantly.”

The Light Shines in the Darkness

John goes on to say that this life is the light of men and this light shines in the darkness (v4-5). We have already considered in the weeks prior that the darkness of sin lies over all of mankind. There is death, ignorance, and gloom because of sin. When you experience death among your family and friends, consider that this is not what God designed in the beginning. Death is a terrible evil and an intruder into God’s perfect creation. There are many who lives their entire lives with confusion and uncertainty around the most obvious questions of life: who am I? what is my purpose? what happens when I die? And as we are seeing especially right now, there is so much gloom and despondency in our world, with mental illness, suicide, and drug overdoses rising precipitously among young people.

Jesus is the light which can cure this darkness. Because he dies the death we deserve because of our sin, we no longer fear death any longer. Because we have the one who is the very truth of God come down to teach us (John 14:6), we no longer have to walk in confusion or ignorance. We know what God requires of us (John 6:29). And because Jesus is the fullness of God, his inexhaustible goodness and joy give us inner happiness even when things should fall apart around us (John 15:11).

And this leads us to the last part of what John says in verse 5: “the darkness has not overcome it.” The Word became flesh in this little baby who would grow up for the purpose of saving us from our sins (Mat 1:21). He did this by dying on the cross and then rising again from he dead. This is the message that was proclaimed throughout the entire world and is the light of hope that is held out to every person. The apostle Paul tells Timothy near the end of his life,

Therefore do not be ashamed of the testimony about our Lord, nor of me his prisoner, but share in suffering for the gospel by the power of God, who saved us and called us to a holy calling, not because of our works but because of his own purpose and grace, which he gave us in Christ Jesus before the ages began, and which now has been manifested through the appearing of our Savior Christ Jesus, who abolished death and brought life and immortality to light through the gospel. 2 Ti 1:8–10

The second verse of the Christmas hymn, Angels from the Realms of Glory states,

This infant is the light of the world. Behold those who dwell in darkness have seen a great light, the prophet foretold (Isa 9:2). Come and worship the source of light and life–Jesus Christ.